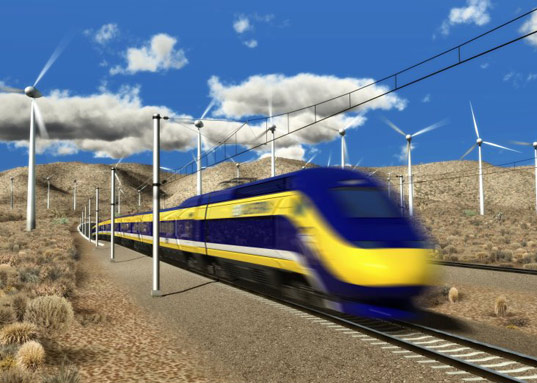 Once again the California bullet train is under fire. Why? Because everyone is afraid it will cost too much. Of course it will cost too much! What absolutely cool thing that lasts more than a few years doesn’t cost a lot: skyscrapers, big budget blockbusters, designer clothes?  And does every naysayer really need to bring up the obvious: ” It’s going to run way over cost estimates.” I believe the correct response to this argument is, “Duh,” (unless you’re the type of person that believes in politicians, lawyers and girls that act sugary sweet only when they need something from you). No one supports the building of a large public project because it’s a bargain or will actually finish on time and under budget, you support it because it’s cool. Just ask sports fans–they get their stadiums built all the time with public funds and have large cost overruns, but no one ever seems to make a big national and political stink out of it.

Proponents want a high-speed train for the romance, mystery, adventure and promiscuity it promises. Those who support it have most likely ridden one and remember what it was like to wander aimlessly down the aisles through connected coaches for no better reason than to let your inner ADHD kid get up and move.  Or perhaps it was for the chance to lock eyes again with that handsome stranger you saw at the train station and hope to bump into on the way to the on-board bar/cafe.  On planes you’re too uncomfortable to move and everything goes by too fast to make anything happen. Trains, especially high-speed well-designed ones, give you just the right amount of time to meet someone special. Trains after all are sober people’s beer goggles. Opponents don’t seem to understand that trains make everyone look foreign and therefore sexy–not even an American barking his English can dissuade this perception. Somehow under the spell of train travel, passengers find themselves overlooking flaws and melting at the sight of someone wearing a backpack.

Are opponents therefore asking Californians to not live such a dream? Republicans and haters need to control their party pooping ways and let us Californians roam free. Yes Mr. Proud to Reject High Speed Rail Projects Congressman, you might have the money to travel or pay for your kids to travel and experience the mystery of riding on tracks, but not all of us can. Let the masses have a blast and let us put ourselves in debt now for a great time and good investment later.